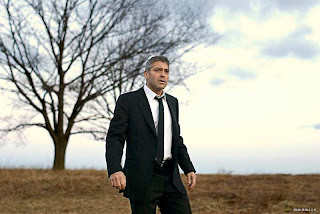 Last night I woke to the wild inconsonant babbling of a dwarf camped outside our bedroom door. I rushed out to meet him, advising that he should keep his voice down—Lisa was sleeping. He was suddenly quiet, and began rooting around multifarious layers of his clothing with thick, hairy hands. The pungency of this-or-that layer, as he exposed dirty skin and clothing usually trapped in fungal gardens of sweat, oil, and body heat was literally breathtaking. I covered my nose and mouth in disgust. Finally he extracted a single, creased, sheet of paper, ancient and near rotting. Its contents are printed below, and it seems to be a second part to the discussion of Michael Clayton that I posted Friday. The fact of the dwarf—-who disappeared as I was inspecting the aforementioned document—-seems to lend credence to the fact that yesterday’s original was conceived by a genii, or at the very least some other magical or mystical creature (certainly not the dwarf).

Michael Clayton’s moment of clarity comes at the side of the road, after he has been demonstrably covered in his own thin film of excrement, running flack for a pent-up and wealthy little man who has just fled the scene of a hit-and-run. The moment is shared release, for Clayton and the audience, who come quickly and with intensity to this point of the movie (about twenty minutes in) knowing very little about the protagonist and his surroundings.

Clayton finds himself in the country. He stops his car and calmly ascends a hill. At its apex are three unflinching horses standing in a line. Clayton watches them. We breathe. In the background, Clayton’s car explodes. Enter moment of clarity.

We are transported backwards four days in time. The plot unravels. We discover there is something not wrong in Arthur, and a very good reason for his insanity. He has, like many of the characters in the movie, been playing a part counter to his own humanity, harnessed by a law firm eager to make use of his desperate energy. Like Clayton, he is homeless; unlike Clayton, he has a home. He’s come out of the right side of his moment of clarity: it’s understood that he will no longer support or tolerate the injustices he has helped perpetrate. His story, however, is not the story, and it ends, violently and with unfortunate necessity.

The plot builds. Clayton’s path seems clear and fixed. He delays, but only psychologically. He prostrates himself before his law firm and begs for money. He is good at his job, but frustrated, underpaid, and held close to their body. He calms himself with illicit gambling, a habit he thought he’d managed to break. He finds himself at the home of a pent-up man drowning in his own opulence… and the hillside, and the horses.

Immediately prior to the horses there is a car chase. Clayton is pursued by a team of professional killers intent on detonating his car—an interesting sequence, because though we have an idea of what is coming, Clayton has none and we are tense with anticipation. The second explosion, the second clarity.

Time folds in on itself, creating a duel moment. This time we are not allowed breath, natural beauty, but are witness to Clayton’s grief. The horses are watching him, like uncomprehending monuments. The car explodes. The movie crystallises. Clayton escapes. He is reborn. He is dead. He is covered in shit. He is insane.

He is Shiva, god of death. Guided, he is provided explicitly with all of the answers we saw him obtain inexplicitly. He directs his energy properly. The world ends. He watches the world, as it continues, calmly.

The discussion lacks a narrative besides the narrative. This seems like an exercise. I will let the creator know my thoughts (and yours, if you have any) in a detailed essay I will compose and then push through the neck of a bottle, which I will then seal and cast into the sea.</p.